JNMOULD as a China mould manufacturer, provides customers with different types of customized plastic crate mould. In the past 20 years, JNMOULD has accumulated many experiences and optimized technologies for the design and processing of advanced revolving crate moulds. We also invested a lot of manpower and material resources to study the quality points and service life of the crate.

JNMOULD as the world's leading mould manufacturer, we design and produce more than 2000 sets of different kinds of plastic crate mould, such as: bottle crate mould, aquatic crate mould, vegetable crate mould, plastic industry crate mould, folding crate mould and so on. Advantages of JNMOULD crate mould are as follows: 1. Long life 2. High speed injection 3. JNMOULD uses pre-hardened steel material higher than HRC33 as the mould base, and controls the hardness of each piece of steel material; Finishing the guide part of the crate mould; Use HDPE materials with a low melt index, such as plastics with an index of 4 or 6; Optimal cooling water channel design.

Folding crate are widely used in closed loop distribution systems for large supermarket chains, convenience stores, shopping centers, clothing, appliances, fruits and vegetables, and food processing. The use of folding crate can realize mechanical treatment, improve the level of rationalization of circulation, and greatly reduce the storage and transportation costs of users. According to the different folding methods, the folding crate mould is divided into two forms: half folding and inner shrinking. 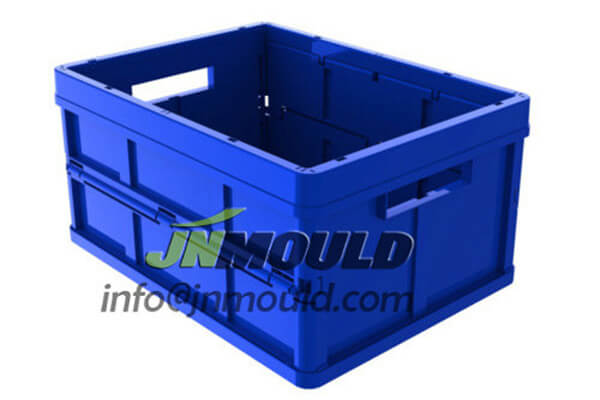